The funeral of past seniors captain, Alan Richardson takes place at Nab Wood on Tuesday 28 May at 240pm and afterwards at the golf club. To commemorate his time at the club I am seeking 3 volunteers to join Bob Helley, John Goodyear and myself in a West Bradford guard of honour at the crematorium. If you can assist then please contact me on 07946 580148.

For those seniors who didn't know Alan I am reproducing a  player spotlight article that I published in September 2011 to give you a small insight in to his life. RIP Alan x 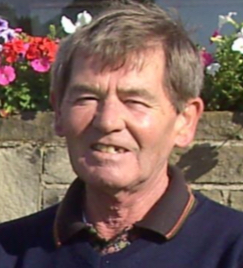 I am very pleased to present my next Spotlight interview with my predecessor as Seniors Captain, namely Mr Alan Richardson.

Alan was born in Bradford on 14th July 1937 to proud parents, George and Christina. His father was a wool combing overlooker and his mother worked in the mill as a yarn spinner. Alan was one of three siblings, namely his younger brother Jimmy, who sadly recently passed away and his sister Barbara. He most certainly qualifies as a fully paid up Bradfordian having spent all his 74 years in the city, spending much of his youth in the Brownroyd district until he married and moved to the Allerton area.

It was at Garforth Street School in Allerton, where Alan remembers enjoying his maths and history lessons as well as developing a keen interest in various sports including football in which he was known as the Tom Finney of his time!

His first job on leaving school was on a farm, where apparently he was given all the dirtiest of tasks for the paltry sum of one pound six shillings per week. He soon realised muckspreading was not for him and the saying ‘where there’s muck there’s brass’ was never further from the truth! Consequently, anything was going to be an improvement on farming so he opted for something completely different and tried his hand at joinery. Sadly, this line of work, ‘wood’ also turn out not to be to Alan’s liking.

After some thought he decided to follow in the footsteps of his parents and take up a position at one of Bradford’s best known worsted spinners, Daniel Illingworth and Sons. It was 1953 when Alan commenced employment there and it is safe to say that he had found his true vocation in life as it was in another century in year 2002, some 49 years later when he finally ended his stay.

And that was only because the firm closed down!!

He first started at Illingworth’s as a jobber, which for the uneducated or less senior members was someone who apparently made sure all the machinery was well oiled and greased. He quickly realised that hard work was rewarded as he worked his way up through the ranks throughout the group, from apprentice overlooker to departmental manager with responsibilities for acquiring all the raw wool materials used in the production of spun yarn, which was then sold to make military sweaters and socks.

In his younger days Alan enjoyed playing football, badminton and squash, the latter of which was without doubt his forte. Unfortunately, a serious ankle injury cut short his energetic playing pursuits leading to him eventually taking up the more sedate game of golf through the encouragement of his two sons, Darren and Craig who both played golf at Rhodesway School. It didn’t take long for Alan to become hooked or should that read sliced on the game of golf and in 1990 he decided to join his local club at the time, our beloved West Bradford, where he has remained a loyal and much respected member.

Alan is one of a small band of golfers, who have achieved the notable distinction of a hole in one, when he succeeded at the 5th hole at West Bradford, something even his golfing idol, Lee Westwood would have been proud of. Another of his notable achievements was in winning The Danny Barry Trophy better ball competition with a friend of his with a staggering stableford score of 47 points. Unfortunately, Alan’s memory fails him on how many of the 47 points he contributed to!

Whilst it is pleasing to note Alan’s golfing prowess it would be remiss of me to not mention the ‘darker side’ of Alan, who despite his small frame is one not to be messed with. His steely look together with a strong passion and desire to be a winner was there for all to see who played with him, but on the odd day when things went wrong it most certainly was not always the place to be.  Many of you will have your own memories of Alan ‘in a mood’ when his clubs have been known to fly around, the air turning blue, followed by the occasional course departure!

I fondly remember my early outings with the seniors when Alan called for silence in the clubhouse to make an announcement in a firm and authoritative manner, which was very much reminiscent of my old headmaster. Believe it or not I was always silent in those days, however others were not, but did so at their peril.

Whilst ill health has meant that Alan is no longer able to do a full eighteen and consequently unable to compete with the over 55’s on a Monday,  he is a key playing member of the ‘senior seniors’ group who all play regularly, but over fewer holes.

Alan also has much to answer for concerning my own situation, he was instrumental in me not only joining the seniors section, but eventually in encouraging me to succeed him as Seniors Captain. However, Alan’s love of the club and experience has fortunately not been lost as he has remained a much valued member of the seniors committee. His willingness to offer advice and give support on club functions, such as Ladies and Seniors Open Days reflect his friendly nature, a quality to be admired and much appreciated by all concerned.

Don’t be fooled by Alan’s sylphlike physique as it certainly does not reflect his appetite for food, which he particularly likes to be on the spicy side allegedly just how he liked his women! His list of preferred TV viewing include sport, particularly football and all the documentary channels, along with a bit of rock ‘n’ roll music with Queen being his favourite band. Being a huge Wilbur Smith fan the last book he read was his latest ‘Those in Peril’, which strangely rings a bell for many during his captaincy! Never being one to relish our wet weather, Alan’s preferred holiday hot spots are Spain and Egypt.

His first car was a true British classic, an ex GPO grey coloured Morris Minor van with rubber front wings that cost him the mighty sum of £120. Alan recalls it was money well spent as the van took him all over the place in every way you can imagine!! How times have changed as women were obviously less demanding in those days!

Alan very much enjoys his extended family of 4 grandchildren, Matthew, Rebecca, Abigail and Daisy May with ages ranging from 5 to 24, not to mention the latest addition, Amelia May, his first great grandchild of only 4 months.

When asked to describe himself in 3 words, he replied ‘an average person’, but I reckon his modesty prevails. It should perhaps read ‘small and lovable’!!

My thanks to Alan for sharing a very small part of his life with us.

About the Author: Pete Leskovac

A born romantic with a total love for the girls in my life followed closely by the Mighty Bantams. Golf is another passion when it’s going well, but sadly it can be equally frustrating in trying to find consistency! Past Seniors Captain at West Bradford GC 2008-15